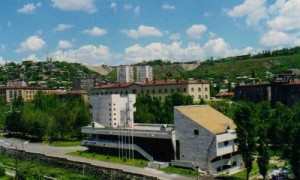 Tekeyan Centre Fund was established with the joint efforts of devoted patriots both from Armenia and the Diaspora. The Fund is aimed at uniting all Armenians in the name of developing and spreading Armenian culture, science and art all over the world.

Tekeyan Centre Fund is implementing cultural, educational, social and other humanitarian projects which are mostly funded through Tekeyan Business Centre and various donations.
The Main Objectives of Tekeyan Centre Fund

Tekeyan Centre is a fund for which the main objective is to support the activities of the Tekeyan Cultural Association and affiliated organizations aimed at carrying out cultural, educational, social and other charity projects. Other NGOs and private persons can also become beneficiaries of the Fund.

Another goal of Tekeyan Centre Fund is to assist the cooperation between the Armenian and foreign branches of the abovementioned organizations. The mission of the Fund is to preserve the Armenian nation through uniting the efforts and capacities of Armenians all over the world for the development of Armenian culture, science and art and their spread throughout Armenia and the Diaspora.

“This was one of the first projects initiated shortly after the independence of Armenia and despite the hardships of those days it was a success. To have a hospitable and beloved place in the Motherland that would also become the symbol of unity of our people, the Motherland and the Armenians that are spread all over the world was one of the most cherished dreams of the Diaspora Armenians. It was also one of the first expressions of confidence and belief in newly independent Armenia and its future.

Hundreds of compatriots united around this goal and contributed to the construction of Tekeyan Centre both morally and financially. I express my deep gratitude to all those people for their devotion and support.

Now, when the outcomes of the cooperation between the Diaspora and the Motherland are obvious and beyond any doubt, I urge everyone, and especially the younger generation, that is to follow us and to continue the tasks initiated by us, to love their Motherland, to be united and determined, to be a shield and buckler for Armenia and Artsakh, never to hesitate when it comes to support and devotion, and to be guided by the idea that as much as the Motherland needs you, it is you that are in need of it the most. This is the keystone to our further success.”

V. Ouzounian
Chairman of the Board of Trustees of Tekeyan Centre Fund

Error: Error validating access token: The session has been invalidated because the user changed their password or Facebook has changed the session for security reasons.
Type: OAuthException
Code: 190
Subcode: 460
Please refer to our Error Message Reference.

The Komitas Choir is looking for talent!

If you're interested in participating in an Armenian choir, please join us for choir practise:

Come and see our stall at the Armenian Street Festival on the 3rd August 2014!